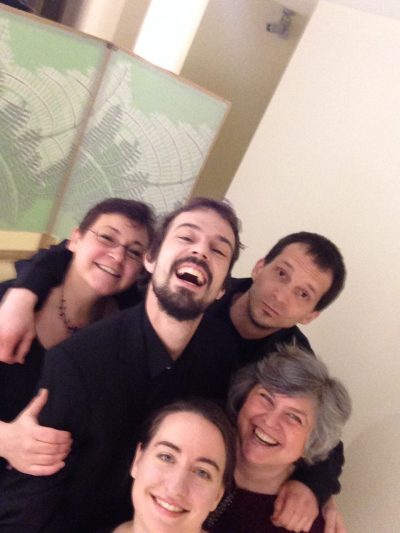 Read something about our newest member Žiga:

Born and raised in Slovenia he started playing classical piano at the age of 8, which gave him a good ear for rhythm and the feel for melody. But it wasn’t until much later, at the age of 20, that he discovered the amazing world of percussion. What started as simple jam sessions in various venues in Slovenia transformed his perception of music completely. Different drums and different sounds and rhythms they produce gave him a glimpse into the pulse of his own body. Shortly after he started playing African music in a percussion band called Bobnars United and darbouka in a band with strong Macedonian influences called Aritmija. Soon many more projects followed – Gal in Galeristi, BAST, projects with Imer Traja Brizani (Bassement, Amala, Electric Band), Dej Še’n Litro (played with Severina), Projekt Mesto, Slavko Ivančič, Sedef, Evala, Sabahbluz and many more.

After four years of playing different venues and festivals like Sziget (H), Balkaniser (UK), FIMU (FR), Lent (SLO), Gypsy festival Brno (CZ), North Sea Jazz Festival (NL), Fusion Festival (DE) he decided to develop his musical skills further, so he applied to Codarts, Hoogeschool voor de Kunsten in Rotterdam, Holland, where he was accepted into both latin and turkish departments. There he studied with various renowned teachers like Nils Fisher (Timbazo), Lucas van Merwijk (Drums United), Maxim Zettel, Udo Demandt, Alper Kekec and Bart Fermie. Working with these teachers as well as musicians from all over the world gave him an insight into Cuban, Brazilian, Middle Eastern and flamenco music. After finishing school and another two years of playing in Holland and Germany, he decided to move back to his homeland Slovenia, where he now resides and plays.